Our Law and Society Master Workshop had the distinct pleasure of having Supreme Court Justice, the honourable Daphne Barak-Erez, as a guest speaker. The workshop, conducted by Dr. Avishai Benish & Dr. Netta Barak-Corren, focuses on current issues in the intersection of law and society, with a special emphasis on law, social work and social policy, discussing research papers or seminal works in this field. In addition, it is also devoted to public and practice-related issues related to law and society in the public sector, the business sector, civil society and the legal system.

Justice Barak-Erez served as the Director of the Minerva Center for Human Rights and the Director of the Cegla Center for Interdisciplinary Research of Law, held the Stewart and Judy Colton Chair in Law and Security, and ultimately became Dean of the Tel Aviv University Faculty of Law. Over the years she taught as Visiting Professor at various universities including the University of Toronto, Columbia Law School, and Stanford Law School. She also held numerous public positions, including Chairperson of the Israeli Association of Public Law, Member of the Council of Higher Education in Israel, and President of the Israeli Law and Society Association. She is a member of the American Law Institute and the International Academy of Comparative Law. She has been awarded several prizes, including the Rector’s Prize for Excellence in Teaching (three times), the Zeltner Prize, the Heshin Prize, the Woman of the City Award (from the City of Tel Aviv) and the Women in Law Award (from the Israeli Bar). She is the author and editor of several books and many articles in Israel, England, Canada, and the United States. In May 2012 she was appointed Justice of the Supreme Court of Israel.

At the workshop, Justice Barak-Erez discussed her article titled: "Putting Man at Center -The Place of a Man in Law" (translation from Hebrew). In it, She reviewes the tensions between principles of attributing rights and blames to an individual, as opposed to attributing it to groups, cooporations and sectors of society. As Barak-Erez suggests, the principle of judging an individual may seem fairly trivial in a liberal democracy, but following recents trends in Israeli Law, she stated that there is continued preoccupation in notions of the 'Public Interest' and in questions of 'group benifits', that should make us revisit questions where those collide.

The workshop's students got to debate Justice Barak-Erez for the majority of the seminar, as she answered questions and examined cases and issues related to the subject. 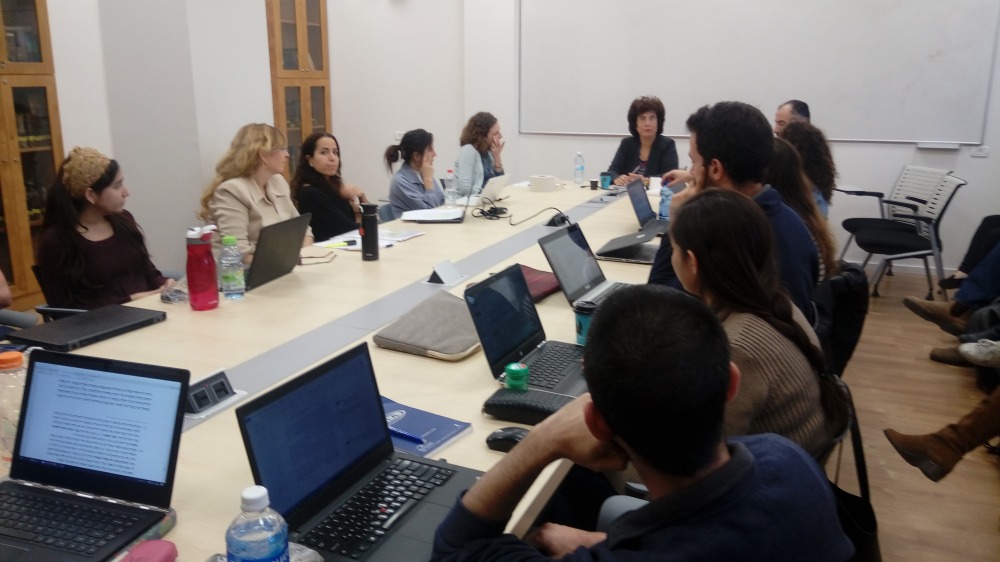