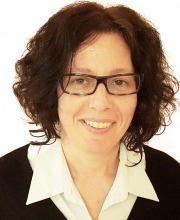 Katya has written on a variety of legal topics, such as advertising, trademarks, patents, freedom of expression, media regulation, defamation, and affirmative action. Her writings critically analyze consumer culture, brand fetishism, and capitalist ideology. They always combine legal analysis with insights from other disciplines, such as economics, sociology, psychology, philosophy, and semiotics. She is also interested in comparative law, particularly in comparing German and US-American legal regulations and tracing their cultural and philosophic roots.

Recently, Katya’s research has begun to focus on urban public space. Together with the photographer Tim Schnetgöke, she is working to unearth the narratives embedded in our shared visual environment and criticize their legal regulation, such as the uneven treatment of graffiti or the privileged position of commercial advertising in public space. They aspire to develop a concept of a more inclusive city – one that would grant its residents a right to design and redesign public spaces. They are now looking to start an experiment implementing this idea as a project that would allow city residents to place their contributions – texts of images – in visible urban sites.

The Importance of Being First: Economic and Non-economic Dimensions of Inventorship in US-American and German Law (with Lisa Herzog), The American Journal of Comparative Law (forthcoming 2021)

Non-Traditional Trademarks as (Non-Traditional) Means of Cultural Control?, in Non-Traditional Marks and the (Risks of the) Expansion of Trademark  Rights in Singapore (Irene Calboli & Martin Senflleben, eds.) Oxford University Press (2018)